In this newsletter, I often talk about the virtues of prototyping. As I argued many times before, I think ‘doing’ is a much faster way to make process than abstract strategizing. If you start making things, you will get to learn incredibly fast what you need to do to improve your product. You will also learn very fast if people emotionally connect with the idea.

Prototyping is the fastest route to learning if an idea is viable and likeable.

Society as a wicked design challenge

A couple of weeks ago, I had the opportunity to experience the power of prototyping firsthand. Together with Mark Thiessen and Tim Versnel, two friends I met while working for the Dutch Liberal Party VVD, we decided to record our conversations and learn if they might be worth podcasting. All three of us are intrigued by the wicked design problem of how to design the ultimate liberal society. We define the liberal utopia as a society that fosters the highest amount of freedom, opportunities, prosperity and wellbeing for as many people as possible. We firmly believe that societies where there is plenty of opportunities to learn, to grow and to fail, no matter how wealthy your parents are, are worth fighting for. 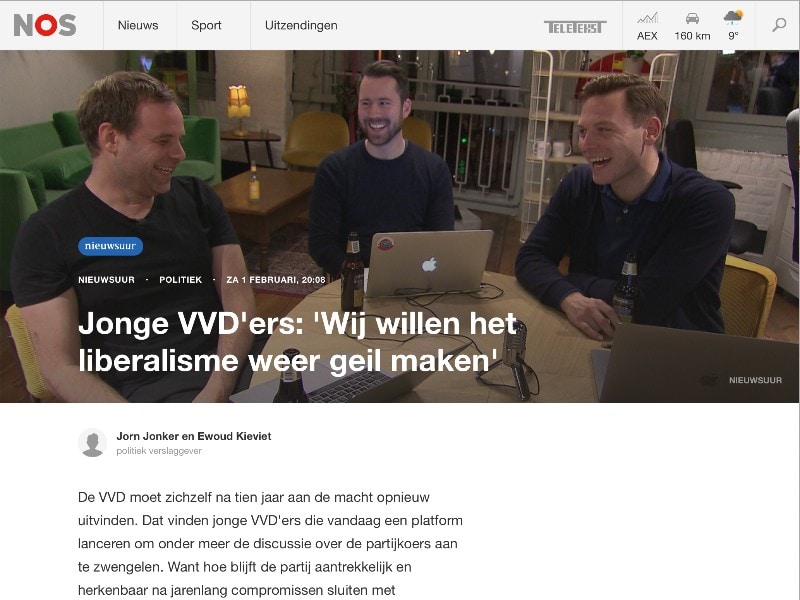 We like to think of this liberal utopia as a behavioural design challenge. If you want to create this society, you will need to think hard about how to influence the behaviour of every stakeholder: citizens, corporations, entrepreneurs and politicians.

This liberal utopia is the big hairy audacious goal that connects all of our conversations, whether we discuss governance, populism, climate crisis, innovation or policies.

After we recorded our first conversation, we were not embarrased with the outcome, so we decided to continue to give it a couple of attempts. The next day Tim got a call from the editors from Nieuwsuur, a prime time political TV-show in the Netherlands because they heard about our prototyping through the grapevine. Five days later a camera crew showed up to record our second episode.

The Power of Prototyping

What amuses me the most is that we hadn’t even published our first episode and the podcast already became a phenomenon. We neither had proper recording gear, so the sound quality was utterly embarrassing. We also had no idea how we wanted to talk, as you will notice if you can get beyond the first 10 minutes. However, through prototyping, we quickly learned that the idea had leverage. We even discovered that there was a big appetite for this content amongst people who want liberalism to flourish, and that includes people from the competing Dutch Liberal party D66. We would never have discovered this if we had waited till we got it just right. Even worse, I think we probably wouldn’t have succeeded in eventually publishing our first episode.

I think it was Stanford Professor Steve Blank, an authority on startups, who once famously said: “If you’re not embarrassed by your first release, you probably released too late”.

The interview that was used as teaser (Dutch).