How to design team behaviour?

How to design team behaviour?

In this blog post I want to explore a fascinating phenomenon: how individuals morph into groups. Behavioural Science sheds some perspective on group behaviour in organizations and how to influence this in a positive way. So if you struggle with how to be creative, productive and happy within your team, then this blog is for you.

How do individuals morph into groups?

Groups are a fascinating psychological phenomenon. Put a random selection of people in a room, and their brain tries to figure out as fast as possible how to form a group. Every group quickly produces leaders, facilitators, followers and saboteurs. Some groups dissolve instantly into subgroups or couples. This process is mostly automatic and unconscious.

What’s even more fascinating is what happens when you throw in a new person into an existing group. Their automatic brain is working extra hours to decipher what the implicit rules of this group are: Who is the formal and informal leader? How do we talk to each other? What are the taboos in this group, and whom do I have to befriend? Is this group built on trust or competition?

In his autobiography “I am Zlatan Ibrahimovic“, the soccer superstar Zlatan Ibrahimovic tells the fascinating story of how the group culture of FC Barcelona, the biggest club in the world, psychologically broke him. Under the reign of coach Pep Guardiola, there was a stringent “act normal”-culture, to which most of their superstars (Messi, Iniesta) submitted themselves. For an eccentric personality like Zlatan, who grew up in the suburbs, this was a nightmare. Here are some more juice details, if you like football. 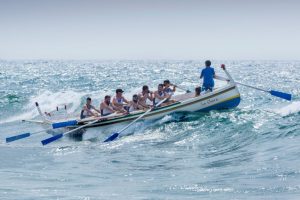 The behavioural rules of a group

A group is a set of unconscious rules that govern the interactions between the individuals within the group. This pragmatic definition gives us an interesting lens to look at the desired and undesired group behaviour in organisations. You can have as many fancy mission statements as you want, or you can have installed well-designed processes, in the end, people adapt their behaviour based on what they observe in the behaviour of others. Our automatic brain (system 1) is hardwired this way to pick up these cues and signals.

When people observe that some people get away with laziness, they will adapt their behaviour. If they see that the boss overrules decisions, everyone will work on getting approval first. Imagine they observe that autonomous decisions that didn’t turn out well are being punished by management. In that case, the whole group will fill its days by setting up meetings with the sole purpose of distributing risk and accountability to the team. And if the boss signals that his idea of good work is working long hours, you’ll quickly see everyone running around, working late and sending torrents of e-mails.

How to transform organisational culture?

Organisational culture is nothing more than the beliefs and behaviours that people learn by observing each other.

An optimistic, creative culture often grows on top of some game rules that might look trivial at first. We had a team once who decided to run a retrospective meeting of one hour every Friday afternoon. In this meeting, they committed to give honest feedback on each other: What went great? What could have been better? After three uncomfortable sessions, this team transformed from a collective of hardworking individuals to a group that was hungry to help each other to learn and grow, and to become exceptional. Out of this small intervention – the installation of a simple habit – a group emerged with a robust set of new rules. In the end this team transformed both the company, as well as the identity of the people in this group.

Our popular report “Leading distributed teams” is a great way to understand the hidden forces that shape employee behaviour. The report gives you great insights and interventions to transform a distributed team into a high-performance team that consists of creative, productive and happy team members. Or check out our special page about Leadership & Team behaviour to discover how Behavioural Design can shape desired behaviours and outcomes within organisations.