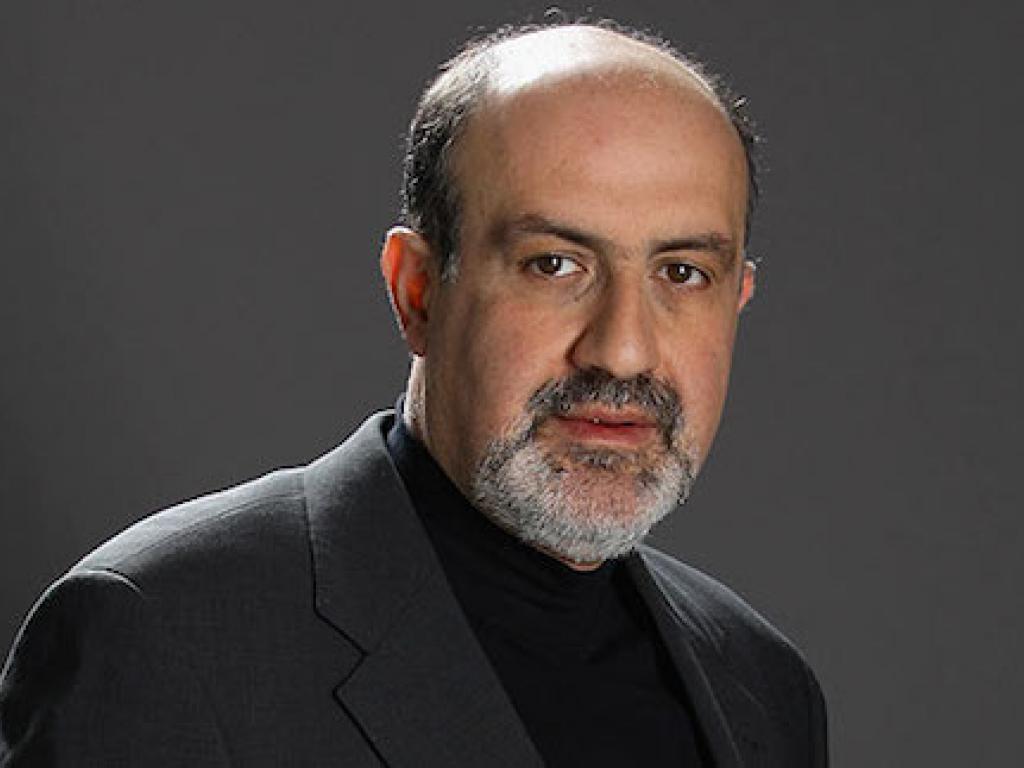 How to be anti-fragile when the virus hits the economy? (update 22/03)

How to be anti-fragile when the virus hits the economy? (update 22/03)

We are now 8 days further into this crisis and the world has gone into various forms of lockdown. There’s a big debate on whether this is the right strategy. It could be the worst of two worlds: We will harm the economy and when shit will hit the fan, we’ll be even more vulnerable. Nassim Taleb takes – as always – a radically different approach. He argues in this paper that lockdown could literarily wipe the virus out in 2 or 3 months. Hopeful.

I have added a couple of nuances at the end of this blog on austerity.

Nassim Taleb (the subject of this post) argues that this pandemic is NOT a Black Swan. This doesn’t contradict this blog below. I have included the implication of this argument below.

As I’m writing this piece (March 10th 2020), the virus is raging through the economy. Stock markets are heading towards catastrophic losses, and governments are forced to take draconic measures. The virus is going to hit the economy hard. How do we make sense of this all? And what’s the best way to respond as businesses and as a society?  The most useful mental models that come to mind are the concepts of ‘Black Swan Events’ and ‘Anti-fragility’ by Nassim Nicolas Taleb. 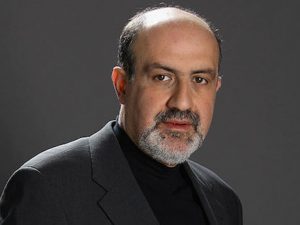 In The Black Swan, Nassim Nicolas Taleb argues that we humans assume that the world is a fairly predictable place. We believe the stock market will keep on growing. We act upon the belief that the world will keep on evolving towards more prosperity. We assume interests will remain so low; you’d be crazy not to borrow. We keep pumping CO2 into the atmosphere because we believe that nature will keep on absorbing most of the damage we inflict upon her. Taleb argues that we all think we live in Normalistan, and we make all of our decision based on a firm believe in Normalistan. This conviction works very well,… until it doesn’t.

Taleb argues that Normalistan is an Illusion. Once in a while, an extreme and unexpected event happens that turns everything on its head. The classic example is a crash of the stock market. In 2008 everyone was drunk with optimism about the ludicrous profits they could make on the stock market and in the housing market, until the day that Lehman fell.

Taleb calls these events’ Black Swan Events’: Highly improbalistic events that instantly reshuffle everything we thought we knew about the world. People always thought all swans are white until one-day explorers brought a black swan from Australia. This urged us to revise our understanding of the world instantly. Taleb himself made a fortune as a trader betting against ‘black swan events’. He took insurance against the crash of stocks, waited for years until the stock market crashed and got incredibly rich. For a similar story; Watch the Big Short on Netflix. 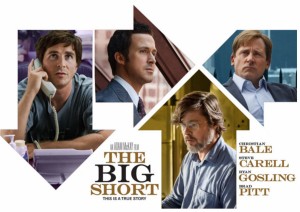 The Big Short – On Netflix

How to deal with black swans: Anti-fragilty

After writing the Black Swan, Taleb followed up with the book ‘Antifragile: Things that Gain from Disorder‘, in which he came up with strategies to deal with Black Swan Events. He argues that most systems cannot cope very well with disorder or unexpected events. Big corporations, for instance, are very robust, which works very well in times of economic booms. However, robustness becomes highly problematic in times of crisis or the face of technological disruption and rapid market transformation. A big corporation is like a tanker, that has a significant advantage in calm, open waters, but is hopeless when it needs to manoeuvre fast and agile.

The opposite of a fragile system is a system that gets stronger from disorder. For instance: Netflix runs the Chaos Monkey on their servers. The chaos monkey is a script that attacks servers or groups of servers. Netflix inflicts constant unexpected attacks upon itself to get stronger when it has to deal with attacks from the outside world. Taleb calls these systems anti-fragile.

Antifragile systems benefit from disorder, obstacles, unexpected events, or change. Silicon Valley, for instance, is very anti-fragile, because it counts on lots of startups to fail because they expect a tiny group of startups to become massively successful. By allowing lots of failure to happen, it increases its chances of stumbling upon success. 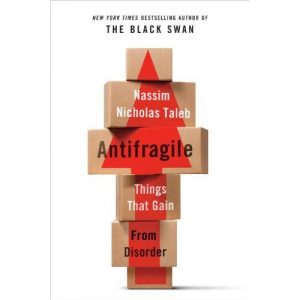 Covid-19 is a Black Swan Event

This brings me to the Corona virus. This is a classic black swan event. Out of nowhere, it suddenly threatens the global economy, the unstoppable rise of China, the American elections, etc. Trillions of dollars of values already evaporated in the course of days. And we’re just getting started.

The virus is ruthless in bringing to the surface which systems are anti-fragile and which ones are not. Let’s look at some observations of how obviously fragile our economy is:

The efficiency maffia holds a firm grip on the economy. And they usually get away with it, until they get surprised by a black swan event. They collectively shout in despair that they had never seen in coming.

The problem is: There are always going to be Black Swan Events. You never know when, but they’ll happen. We have to design our systems – society, work, our personal lives,… – with the expectation of black swan events at heart.

Anti-fragility in the face of Corona

What do anti-fragile systems look like? Who will get stronger from this virus-induced economic recession in the making? Here are a couple of principles

I don’t know how this crisis will evolve, and of course, we didn’t see this one coming. And to be honest, there’s no way to tell if this will play out well. We have to embrace it and practice anti-fragility.

On several occasions I have been writing against fiscal austerity. In my argument, I followed the classic Keynsian argument that governments should do the exact opposite of what people need to do when in debt: spend more. This argument has been defended by Nobel Prize Laureates Joseph Stiglitz and Paul Krugman and has been argued for, both with strong data-support and with a highly entertaining Scottish accent by Mark Blyth, the author of the book “Against Austerity”. (must watch lecture).

However, in the wake of this epic crisis, you could also argue that running a surplus in good times wasn’t a bad idea after all. Both the Dutch and the German government now turn out to have deep pockets for both supporting their economy and lend astronomical amounts of money. The Germans are waking up with the realisation that Merkel wan’t crazy after all.

This is what Economics Professor Tyler Cowen writes on his blog (which really is the essential go-to place during their crisis):

Of course the content of the spending matters a great deal, but this is in principle the right thing to do.  But here is the catch: out on social media, and in the old days of the blogosphere, there was so much Merkel hatred: “the austerity queen who killed thousands,” etc.  But now she has been vindicated.  We all can agree that a government should (on average) run surpluses in good times and deficits in bad times.  Well…2011-2012…those were the good times.  Yikes.

Merkel goes up in status with this, big time.  And of course it is no surprise that a bunch of Germans would have a better sense of what the bad times really can look like.

Nassim Taleb insists that this is NOT a black swan. For the simple reason that the outbreak of a  global pandemic was a highly probable and predictable event. We were warned for it by leading scientists for decades, and we had multiple occasions where we could have tested our capacity to deal with it  (e.g. the SARS-outbreak). He is therefore very harsh on companies that decided to use the abundant availability of cheap capital in the last decade to buy back their own stocks, which would drive up the value, that in turn lead to bonuses dividends for management and shareholders. Taleb on Twitter:

“Explain to me why we should spent taxpayer money to bailout companies (airlines) who spent their cash buying their own stock so the CEO gets optionality, instead of having a crisis buffer. We should bail out individuals based on needs, not corporations”.

BTW: this is the theme of his latest book, called “Skin in the Game”, in which he argues that a lot of terrible decision making could easily be avoided if the ones who took the decision can be both awarded and punished for their decisions. This crisis might teach shareholders something about expecting more skin in the game from the management of the companies they invest in.

Also read: Live like a Hydra: how to practice antifragility in your personal life.

Watch the complete overview of our blogs on behavioural design.