How to debunk false claims about climate change?

How to debunk false claims about climate change?

This is a talk I gave at the EuropCom Conference, organized by the European Institutions. I was asked to talk about how to debunk misinformation and false claims about climate change. My take on this subject is that we shouln’t fight facts with facts. Instead we should make climate action more desireable. Here’s the transcript of my talk. 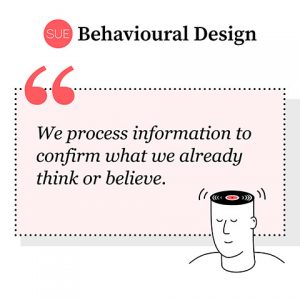 In this brief talk I want to make the argument that facts don’t matter when it comes to influencing minds and changing behaviour. Our brain is hardwired to actively search the facts that match with our beliefs about ourselves and the world, as much as it’s hardwired to reject the facts that don’t match with our beliefs, our identity, or our tribe. In the behavioural science this phenomenon is called confirmation bias. We have written about Confirmation Bias before.

I want to argue instead that the challenge is not to fight biased facts, but to re-frame climate action and turn it into something people feel they are part of.

The problem with the current climate narrative

The climate narrative, as being told by environmentalists and people on the green-left political spectrum is full of ingredients that people love to reject:

(more below the banner)

How our brain works

Everything about this climate narrative is  threatening. Our brain has a simple and brilliant strategy to deal with facts that don’t match with how we think about ourselves and the world: it rejects them. We have many techniques at our disposal to do just that:

We should stop persuading people into climate action and start seducing them instead. Once people have the feeling that climate action is something that will improve their lives and their communities, they will start to embrace the facts that match with these believes.

Here are a couple of ideas:

Want to learn how to use behavioural science to tackle societal challenges?

The Fundamentals Course is perfect for you. You will master a hands-on method to tackle even wicked challenges using applied behavioural science. Mind-shifting know-how that is made 100% practical.

What I have tried to argue is that all information is biased. We only embrace the information that matches with our identity and our tribe and reject the truths that are associated with the beliefs of other tribes.

So instead of worrying about the biased information, let’s instead make the ideas, beliefs, missions, and visions about the outcomes of climate action more desirable.

If Covid has thaught us one thing, it’s that in the face of existential threat, humanity can join forces at unprecedented scale and create breakthrough after breakthrough. Despite everything that went wrong, it was optimism and ingenuity that got us out of this crisis.

Case study: How to get people to separate their organic waste: blog post

How Norway nudges its citizens to drive electric: blog post